History was made in Washington, D.C., on June 27, 2014 when the east met the west — and a Virginia columnist earned the 15th anniversary Will Rogers Humanitarian Award. The celebration in the U.S. Capitol Visitors Center, steps away from the statue of Will Rogers just outside the House Chamber, was dedicated to the memory of Will’s grandson James Kemmler (Kem) Rogers, who passed away just two weeks before the ceremony.

The Will Rogers Humanitarian Award is presented annually by the National Society of Newspaper Columnists to a writer whose work has positively affected readers’ lives and produced tangible humanitarian benefits.

Will Rogers practiced civic journalism long before it became a familiar term – aptly described by Washington D.C.’s Pew Research Center as “both a philosophy and a set of values … at its heart is a belief that journalism has an obligation to public life— an obligation that goes beyond just telling the news or unloading lots of facts.”

That belief inspired the establishment of the Will Rogers Humanitarian Award in 1999 by the National Society of Newspaper Columnists. This annual award recognizes a columnist whose work has positively affected readers’ lives and produced tangible benefits for the community served by the columnist’s newspaper. It is based on columns that show results.

The award is a handsome replica of the statue of Will Rogers in the U.S. Capitol. A $500 stipend also is awarded the winner to help defray costs of attending the annual conference. 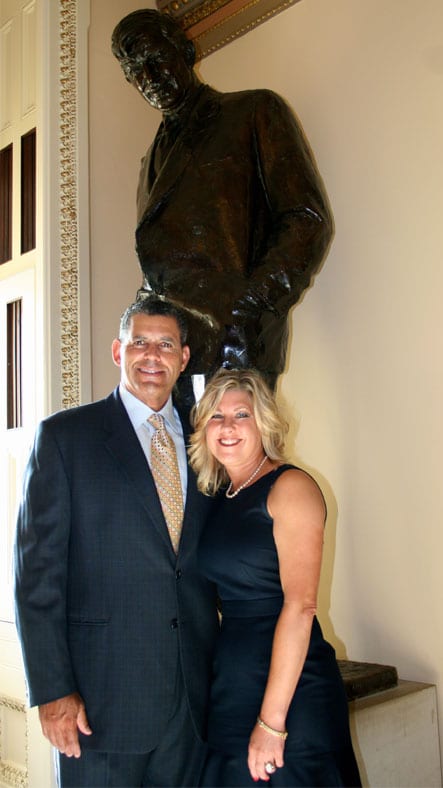 Most recently appointed to represent the Rogers family on the Will Rogers Memorial Commission, Jennifer Rogers-Etcheverry (Kem Rogers’daughter and Will Rogers Motion Picture Pioneers Foundation Board Member) was in Washington to present the Will Rogers Humanitarian Award to Michael P. Williams of the Richmond Times-Dispatch. “We are making history tonight,” said Jennifer, “this is extra special.”

Williams said he joined the Richmond paper staff when black journalists were not all that prevalent and that many people held him “in contempt to want to write their story.” He pleaded with his editors for a chance to write a column of color in a city predominantly black, expressing a need to “report on our community. They called my bluff and I found my voice.” He has used that voice to speak on “behalf of the poor, people of color, disenfranchised and the lost; to advocate for neighborhoods so we will remember them. By writing about humans, we become humans ourselves. In the heart of each journalist lies a humanitarian aspect.”

“Recognitions like this,” he said, lifting the replica of the statue of Will Rogers in the U.S. Capitol, “keeps us going. I love what I am doing, believe in what I am doing. This award is sustenance.”

Williams’ humanitarian impact has been felt through his work in classrooms, in the community and taking on major issues. He helped raised funds for a choir from one of only two remaining Richmond black high schools to go to New York and perform in Carnegie Hall. “A wonderful choir,” he said, “and great director from the most impoverished neighborhoods of Richmond, and certainly no money to travel to New York. It could be a life-changing experience to get out of Richmond, get away from their environment. He believes “humanitarian, by definition, should be a journalist highest calling.”

Footnote: Will Rogers the Humanitarian: Will Rogers used his public forum in newspapers, radio and personal appearances to raise millions of dollars for victims of floods in the South, droughts in the Southwest and earthquakes in Latin America. He led a Red Cross national relief tour in the Depression winter of 1931, stirring communities and citizens to action.