Will Rogers’ vaudeville rope act led to success in the Ziegfeld Follies, which in turn led to the first of his many movie contracts. His 1920s syndicated newspaper column and his radio appearances increased his visibility and popularity. Rogers crusaded for aviation expansion, and provided Americans with first-hand accounts of his world travels. His earthy anecdotes and folksy style allowed him to poke fun at gangsters, prohibition, politicians, government programs, and a host of other controversial topics in a way that was appreciated by a national audience, with no one offended. His aphorisms, couched in humorous terms, were widely quoted: “I am not a member of an organized political party. I am a Democrat.” Another widely quoted Will Rogers comment was “I don’t make jokes. I just watch the government and report the facts.”

Rogers was a staunch Democrat, but he also supported Republican Calvin Coolidge. Democrat Roosevelt was his favorite. Although he supported Roosevelt’s New Deal, he could just as easily joke about it: “Lord, the money we do spend on Government and it’s not one bit better than the government we got for one-third the money twenty years ago.” 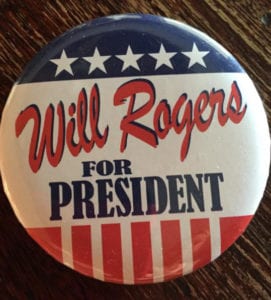 Rogers served as a goodwill ambassador to Mexico, and a brief stint as mayor of Beverly Hills. The California city was incorporated, and thus run by an appointed city manager. The “mayor’s office” was merely a ceremonial one that enabled Will to make more jokes about do-nothing politicians such as himself. During the depths of the Great Depression, angered by Washington’s inability to feed the people, he embarked on a cross country fundraising tour for the Red Cross.

Rogers thought all campaigning was bunk. To prove the point, he mounted a mock campaign in 1928 for the presidency. His only vehicle was the pages of Life, a weekly humor magazine. Rogers ran as the “bunkless candidate” of the Anti-Bunk Party. His only campaign promise was that, if elected, he would resign. Every week, from Memorial Day through Election Day, Rogers caricatured the farcical humors of grave campaign politics. On election day he declared victory and resigned.